The Time I Cooked Lunch

My good friend Gianmichael departed Astoria today for his Great White North homeland. While I'll no doubt see him fairly regularly as he returns to the area on business, it's sad to see one of my favourite people I've met in the last few years depart. This entry's for you GM!

I forget who exactly clued me in to the wonderful stuffed and roasted tomato which was the centrepiece of this dish, but I modified a recipe from Poor Girl Eats Well. You should read deeper into her blog as she writes and photographs well. In addition to the tomato cups I created a potato and bell pepper hash along the lines of that which Mom Cooks Everything makes.


Yes, you read that right. Duck bacon. Specifically, while heading over to my usual pork/bacon substitute of turkey bacon, I discovered the grocer's bacon section replete with a new denizen: D'Artagnan Uncured Smoked Duck Bacon. This, this was the product of my dreams and bringing it home it exceeded all expectations. Better than I remember bacon tasting and that verified by both of my pork-eating friends. I have likely found my Mastering the Art of French Cooking bacon substitute.

Cook the bacon up ahead of time, like you would normal bacon. Dice. No need to keep it hot. At the same time dice the fresh asparagus into 1/4 inch pieces and sautee in a tsp of olive oil. 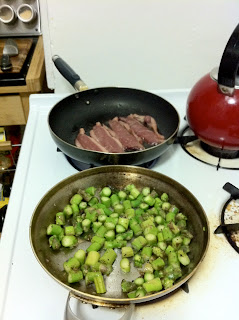 There's no need to peel the tomatoes. Simply cut the stem out and then cut a hole around the wider edge of the top. Scoop out the insides, being careful not to puncture the bottom of the tomato. 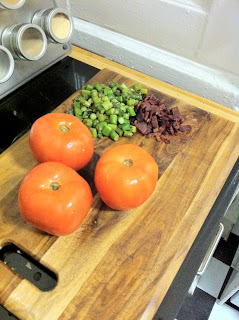 Spread the salt around the insides of the tomato cup, then fill the tomato 75% of the way with a mixture of your duck bacon and asparagus and place in a cooking sheet, pie shell, or baking dish. Crack the egg into the tomato cup and bake for 20 - 25 minutes until the egg has reached the consistency you desire.

We went for a slightly hard yolk. 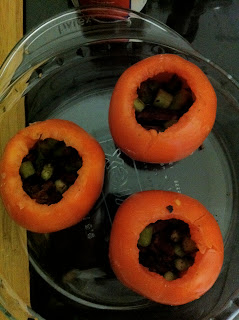 Feel free to substitute vegetables in this dish. Hash, at least in my household and many others, is traditionally a dish in which you can use fresh leftovers and "ends of things."

Brown the ingredients in a large pan or pot over medium heat in olive oil. Add a cup or two of water or broth and simmer for about a half hour. The goal is to have a slightly stewy consistency to the dish at the end with all the flavours melded together.

Add the salt and pepper to taste toward the end. 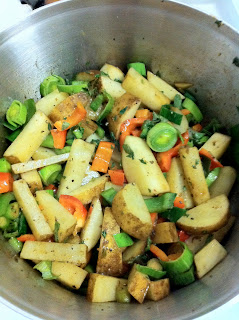 While I was cooking I broke the wishbone from The Roast Chicken with Wasabi Sauce with the Thrifty Sifter. We ended up with ends that were the same length. What happens then!? 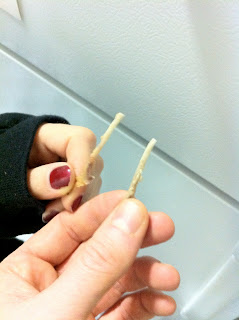 More hashy hash further along in its cooking. 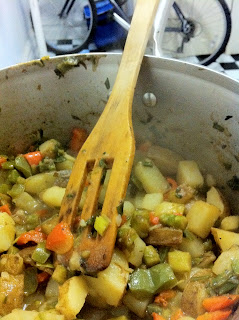 My new magnetic timer. I suspect it's a cheap piece of crap, but so far it's doing the job. 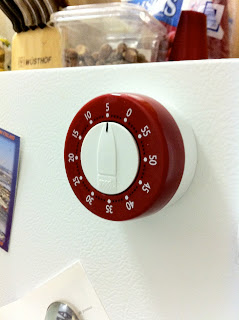 And here I realized the hash was done before the tomato cups. The Thrifty Sifter was hungry! 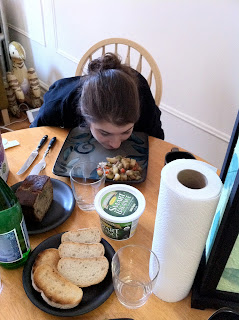 Gianmichael relaxing on my couch while we wait for the main dish. 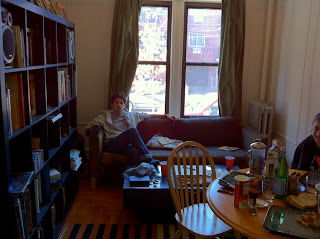 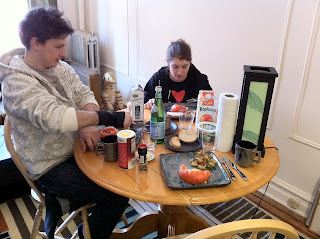 As you can see, the tomato fell apart. This happened with all three tomatoes and I'm unsure why. 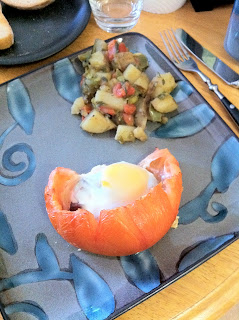 Still, served with some ciabatta from the Gian & Piero Bakery (toasted for GM, not for me and the Thrifty Sifter), this was a fantastic meal. I got rave reviews from my guests! 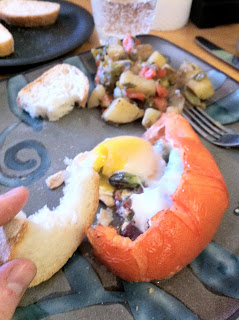 Your soundtrack for this entry: Type O Negative - Love You to Death
Posted by Jeremy Rosen at 10:16 PM