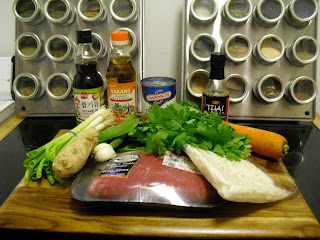 Udon is one of my favourite dishes. I've still never eaten an authentic dish, but a Manhattan lunch joint I frequent taught me to love the firm, square noodle.

It wasn't until last week that I decided to take a shot at making an udon dish myself. First stop: epicurious. I'll admit I've leaned a bit too heavily on them recently for recipes, but they have a great iPhone app, thousands of recipes I can search easily, and valuable user ratings for each.

Unfolding the meat and applying the mixed marinade was the best part of this recipe. Were I to make this recipe again, I would let the meat marinate at least two hours. 10 minutes is enough to add a hint of flavour, but not enough to add to the overall taste of the final dish. 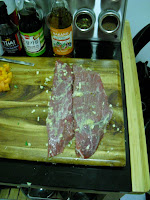 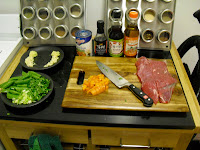 Yes, that's my new acacia cutting board. After 12 years of only having a tiny plastic one that slides everywhere, it's a welcome addition to my kitchen.

Of course there's nothing quite like the crackling of fresh, garlic-covered meat in the pan. Pre-heat those suckers, drop some olive oil in, and let them go to town. 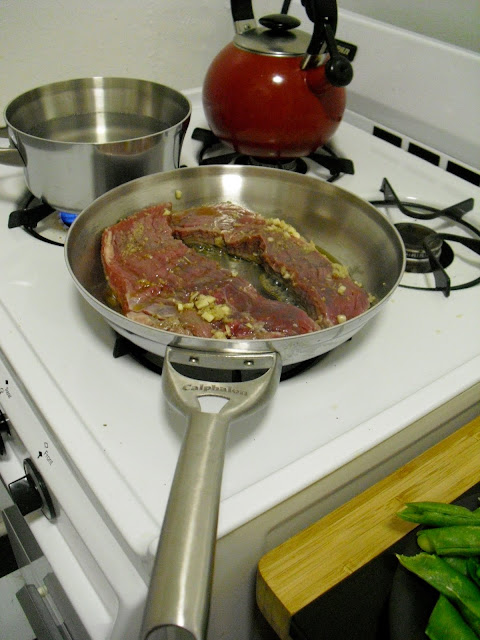 Yes, those are peas next to the handle, and we've got more to say about them. 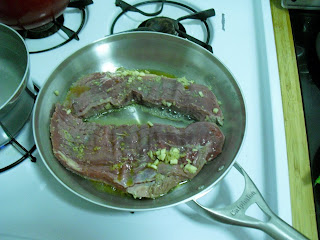 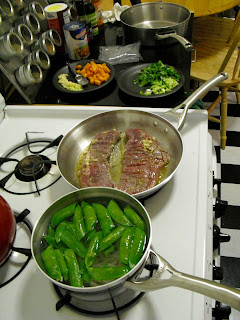 Hey, there's those peas again. There's something sexual about pea pods. That thing is that they're part of the pea plant's reproductive cycle.

This recipe actually calls for sugar snap peas, which weren't available at United Bros. the day I made this recipe. Instead I substituted some flat peas.

These definitely should have been prepared for cooking much better. For instance I only removed the stem, but forgot to remove the tough, stringy bit that runs the length of the pod. This was my first mistake with the peas.

My second mistake was putting the peas in at this point. I made a rookie error and didn't read ahead in the recipe. These were only supposed to go in the last minute of the udon boil. 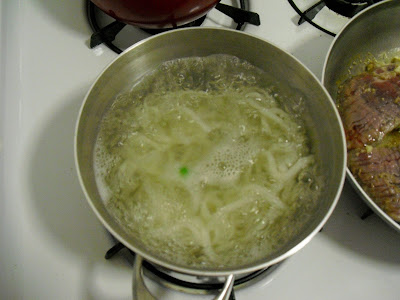 As you can see I left a single pea in the boiling udon to remind me of my human imperfection.

At this point I also flipped the flank steak its single flipping time. After a few more minutes of cooking, I placed it on my small cutting board to rest. 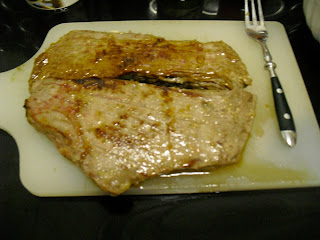 This meat was too well-done with me, which I should have recognized from the recipe. Meat that I prepare for myself is usually seared and very rare.

I sliced this up across the grain and took a couple of test bites. Can't say as I was terribly impressed with the marinade. Like many "Asian" recipes aimed at a Western audience, it seemed too full of ginger.

Most Chinese and Japanese dishes I've tried containing ginger use it much more subtly. 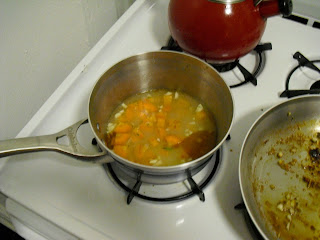 Now, judging by the amount of broth I'm going to guess this is a bastardized form of yaki udon (at least according to my minimal reading on the subject). The broth-to-noodles ratio was pretty low.

If you read the recipe you've probably just noticed an anomaly. Yes, those are carrots, which are not called for. I have a strong propensity to have a good colour-balance in my meals. In this case there was an awful lot of brown and green in the recipe, but nothing on the red end of the spectrum.

And with the broth finished, I apportioned half the udon to a nice-sized bowl, put one sliced steak in, and poured the broth away. Topped with cilantro it looks cute. 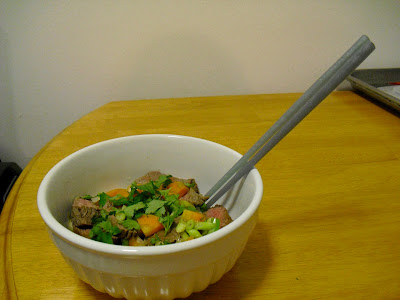 In the end it actually looked better than it tasted. The recipe seemed too tangy on the broth side and not flavourful-enough on the meat side. Fresh cilantro is a plus, but the peas ended up being tough to eat.

It's always the damn peas...

Your soundtrack for this entry is Grand Magus' album Hammer of the North.
Posted by Jeremy Rosen at 10:49 PM 2 comments: