Yes, I finally cracked open my own copy of Mastering the Art of French Cooking. Mom Cooks Everything bought me my own two-volume copy of the Julia Child classic last year and until last night I had yet to dive in.

Part of my issue is not one of laziness, ability, or volition, but rather something I've been reticent to speak about in public to strangers. Namely I keep kosher...mostly. Anyone reading out there who keeps kosher could probably point out several "violations" of kashrut in my kitchen (or even my lifestyle). Basically I just want to avoid drive-by comments about how I don't keep kosher.

Still for the past 16 years, even though I am not religious, I have kept what I consider a kosher eating regimen. No meat and dairy together (though I do eat poultry and dairy together), no shellfish, no locusts, and of course no pork. It's that last bit that threw a spanner in my making of any Julia Child recipe.

After all, mastering the art of French cooking involves the French love for bacon, bacon fat, and creamy sauces on many things. Even making dessert involves bacon. I have no qualms with any of that, but if you keep kosher it's fairly difficult to make many of Child's recipes. More on how I plan to find ways around that later.

NOTE: This recipe requires an hour and a half to two hours of marinating and basting the fish.

To get started, you'll want to open your copy of Mastering the Art of French cooking to page 505. At least, you'll want to do that if you're unfamiliar with juicing a tomato. You'll notice the instructions include squeezing the seeds out over a strainer over a measuring cup. This may come in handy for reserving juices for later use in some recipes, but you can safely discard the seeds and juice for this one. 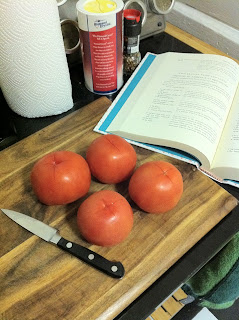 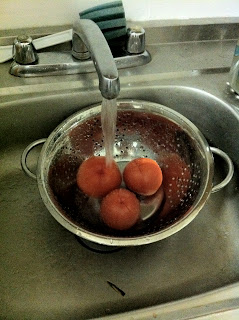 This will make them terribly easy to peel and you can wear the tomato skins on your fingers and pretend to be a tomato monster. When you're done playing with your food, cut out the tomato stem and cut the tomatoes in half across their width. 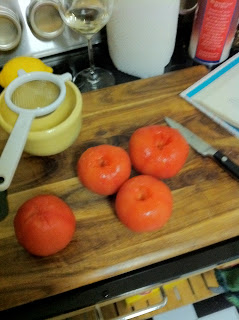 This makes it easy to squeeze out those pesky pips. 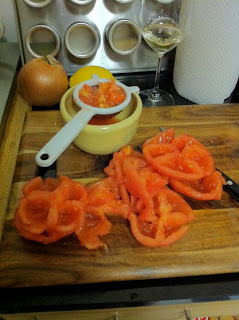 My Snufkin kitchen towel purchased in Finland last year. This comes from the Moomintroll series of books which I enjoyed as a child (and still do!). 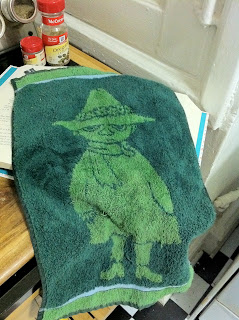 I chose a tuna steak for this recipe because I was concerned about the quality of swordfish I could get at the supermarket and couldn't make it over to the fish market yesterday. If you're following along from page 219, you'll see the first step is to mix the lemon and salt in your baking dish. Beating in the olive oil and pepper is as simple as whisking them in with your measuring spoon.

Add the fish to the baking tray, baste all over, and cover for an hour and a half to two hours, basting and turning every ten minutes or so. You'll notice I used a Pyrex pie shell for this. If you're as of yet uncomfortable with using glass directly over flame (like I was) this is a great recipe to get you comfortable. 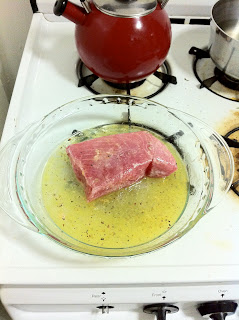 In the meantime, I chopped up the tomatoes, mashed my garlic cloves, and placed them both with the seasoning in a plastic container which waited patiently in the fridge. At this point I also took some time to chop up half my yellow onion. 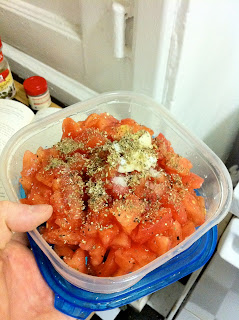 Magically we're an hour and a half later! The fish looked great and I dried its outsides thoroughly before placing it in a very hot skillet with oil, searing both sides for a couple of minutes.

You can see my reserved dry Riesling there on the trolley-top. For this I chose a wine from Alsace, the Joseph Cattin Riesling. Riesling is generally-known for being sweet, but it's possible to produce wine from these grapes of many types. This was a fantastic dry one.

Right about here you'll want to pre-heat the oven to 350 degrees. 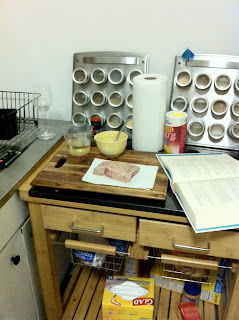 Here was where I realized I forgot to purchase tomato paste, but it wasn't necessary as I had at least two more tomatoes than I needed. While in the end I didn't have the darkest red colour, there was no flavour missed.

Over medium heat, cook up the onions until they are tender. Then stir in the tomato and garlic mixture; cover and cook for five minutes. 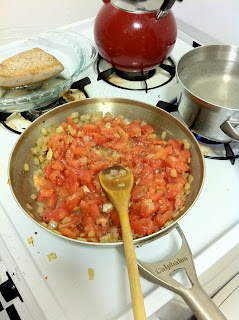 There was no need to correct the seasoning here, so once I was done I put everything over the fish in the baking dish.  Cover that with tin foil and bring it to a simmer on the stove. Once it's bubbling, put it in the oven for fifteen minutes or so. Then pour in your wine and bake for another 30 minutes. The recipe calls for turning the oven down to 325 once the mixture is simmering. This will, I believe, prevent the fish from drying out. 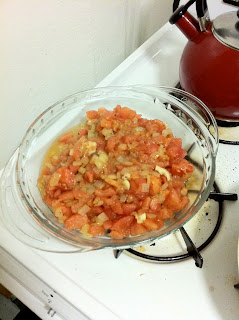 When you're done with the oven, put the fish on your serving platter, scraping all the sauce into the baking dish. 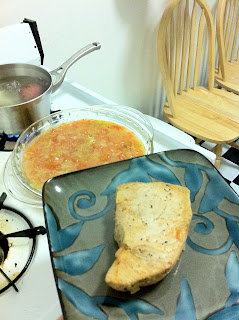 It took me a bit longer to reduce the sauce than the recipe suggests, maybe 20 minutes instead of five. 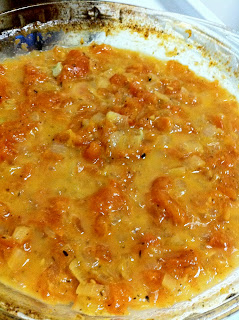 Still, having it over high heat directly on the stove was a fun experience, especially looking through the sauce to the blue flame below. Once it was reduced I stirred in the butter and flour mixture which thickens it up considerably. Brought it back to a simmer and then put on the fish. 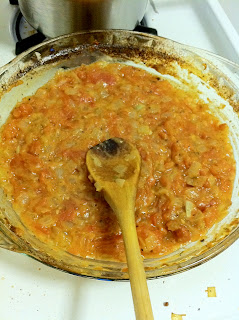 After eating this fine dish (served with boiled potatoes as Julia Child suggests), I stated that it had shaken my world to its foundations. That's no joke: I just made the best tuna I've ever had for myself. The flavours blend so well together and the tanginess mixes perfectly with the hearty fish. 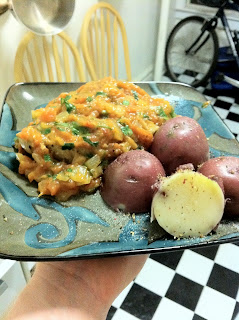 Your soundtrack for this entry: Amon Amarth - The Fate of Norns. That's right, Julia Child and Amon Amarth are together at last.
Posted by Jeremy Rosen at 12:11 PM