When I set out to make The Glorious Chicken my original intention was to finish it off by broiling the breasts with havarti on top. Well...as so often happens I forgot. Thankfully the chicken didn't suffer and doubly-thankfully there were two more breasts upon which to practice my skills.

One was used today in a tasty sandwich, but since I Cook Dinner and only recently blogged about lunch, we'll leave that one off the table this time. Instead I will focus on last night's leftovers, which included the sauteed mushrooms, poblano, and pearl onions from the other night.

The breast was reheated in a 300 degree oven for about 20 minutes, then the broiler was turned on, the chicken was topped with havarti, and put under the broiler for about three minutes. Doing this in the future I'd shred the havarti and broil for only two minutes. Obviously the chicken didn't need the havarti, but it was fantastic with it as well.

Next to this I served some classic mixed frozen vegetables. To these I added a teaspoon of coriander, a half a teaspoon of salt, and about a teaspoon of El Yucateco Green Chile Habanero Sauce. Excellent for kick and flavour. 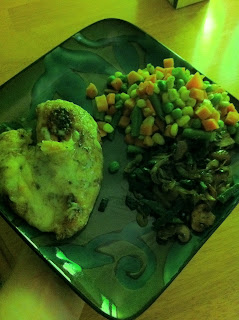 Your soundtrack for this entry: Spiderbait - Fucken Awesome
Posted by Jeremy Rosen at 7:30 AM