The Tuna a Poivre and Brussels Sprouts

This is a rarity: I'm posting this almost immediately after eating. Tonight called for a rather quick meal and here it was. A tuna steak au poivre and spicy brussels sprouts with parmesan were called for; easy to make in a half hour.

I'd recommend a spice grinder for the tuna spices, but other than that this came out fantastic! 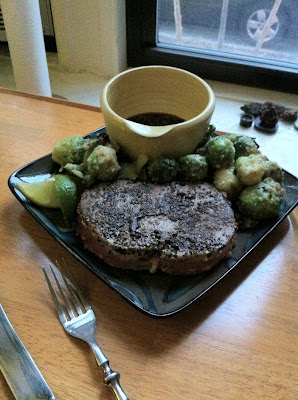 Your soundtrack for this entry: Trivium - In Waves.
Posted by Jeremy Rosen at 8:37 PM No comments:

Ciambotta (or giambotta) is an Italian vegetable stew. Most of my personal Italian knowledge is of Northern Italian fare, so I've explored a lot of Southern Italian food in the last few years.


Heat the oil in a large pot over medium heat until it shimmers. Add onions, celery, carrots, and garlic. Cook until tender (about ten minutes).


The eggplant comes next. Mix it in and cook for an additional ten minutes until tender.


Add the tomatoes and bell peppers, reduce heat to low, and simmer uncovered for fifteen minutes.


Finally, add the rest of the vegetables and simmer uncovered for thirty minutes. Add salt and pepper to taste. 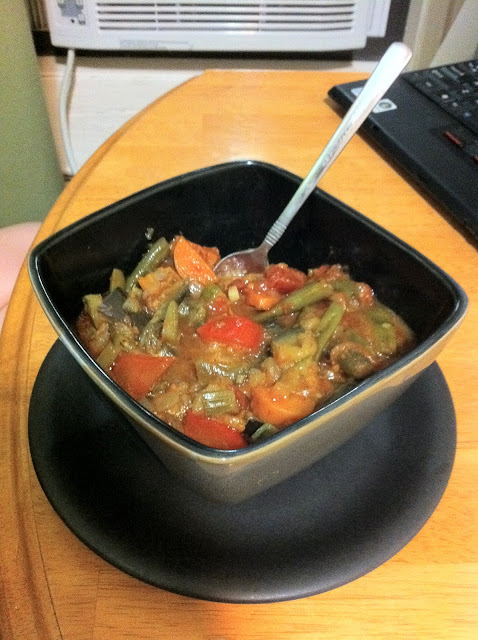 Your soundtrack for this entry: The Soviettes - Ten.
Posted by Jeremy Rosen at 9:30 AM No comments:

The Diced Tomato and Chili Marinated Steak with Black Quinoa

This recipe was improvised using ingredients with which I wasn't that familiar. The result was tasty, but not as good as it could be, so my recipe below is adjusted from what I used to create what you see in the photo.

Drain most of the liquid from the diced tomatoes. Put steak in a bowl and cover entirely in diced tomatoes and chilis. Let marinate for 45 minutes.

Meanwhile, prepare black quinoa according to instructions on the box. Ensure that the liquid is completely absorbed!

When the steak is done marinating, remove from tomatoes and place in a pre-heated skillet over high heat. Prepare rare or you're an uncouth lowlife.

Sautée the diced tomatoes and chilis in a separate pan until hot.

Serve with a swagger. 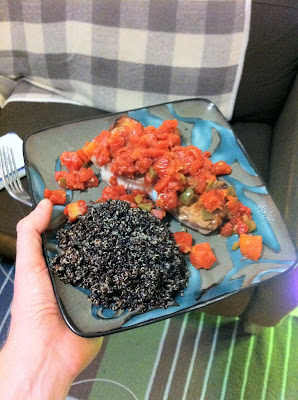 Your soundtrack for this entry: The Birthday Massacre - Always.
Posted by Jeremy Rosen at 9:30 AM No comments:

The Seafood Dinner with Turnips

So, yeah, I've been eating too much bacon since I gave up keeping kosher. Something like three times a week worth of bacon. When I wandered into the Thrifty Sifter's C-Town Grocery Store and discovered that they have an excellent fish selection (even grouper!) I decided to make an all-fish dinner.

At the outset, I'm going to recommend leaving some of the seeds in as we could barely taste the spicy. Also, I know I made a no-no below with the garlic as it wasn't all the same size. I keep forgetting to bring my whet stone over to the Thrifty Sifter's house to sharpen up her cutlery.

At any rate, pre-heat your pan, then add the oil. When it's shimmering, add the chilis and garlic. Cook until just before the garlic starts to turn brown. 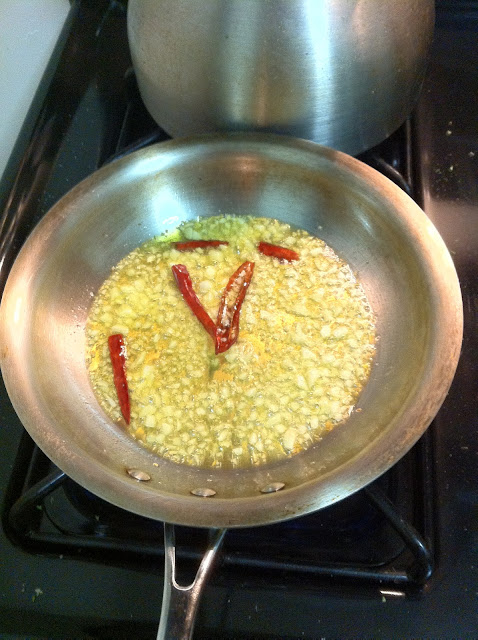 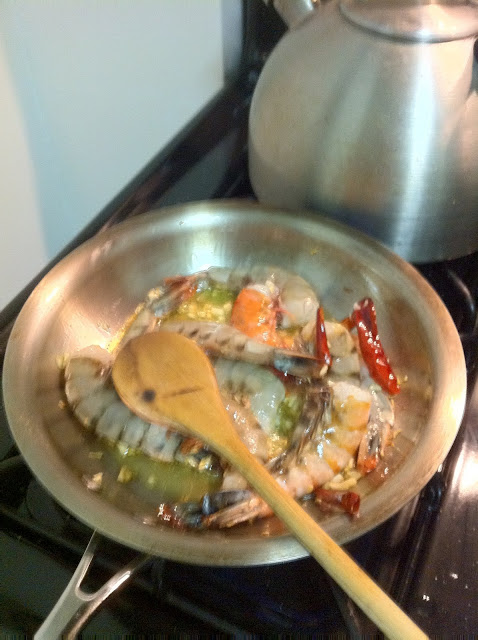 Serve and eat! We ate this while I was cooking up the swordfish. 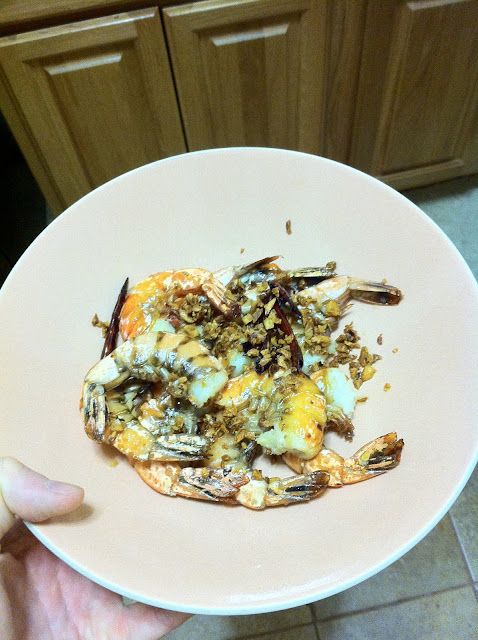 This swordfish. I bought all the main ingredients without consulting a recipe, so we had to figure them out on the fly. Having worked in a fish restaurant for nearly five years, I can cook most any seafood without a recipe, but prefer to try new things. Here we hit up Epicurious for pan-roasted swordfish steaks with mixed peppercorn butter. The Thrifty Sifter made up that butter for me while I was making the shrimp. She's a great chef de partie. 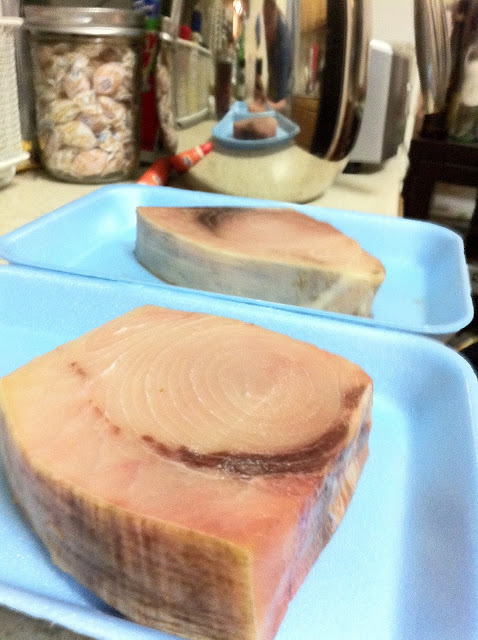 Cooking them up top of the stove in hot oil for three minutes. 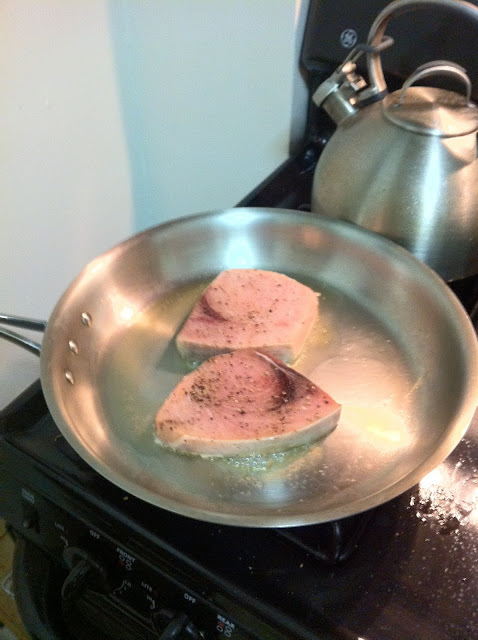 And after they come out of the oven, they are fantastic! Wouldn't change a thing about these. 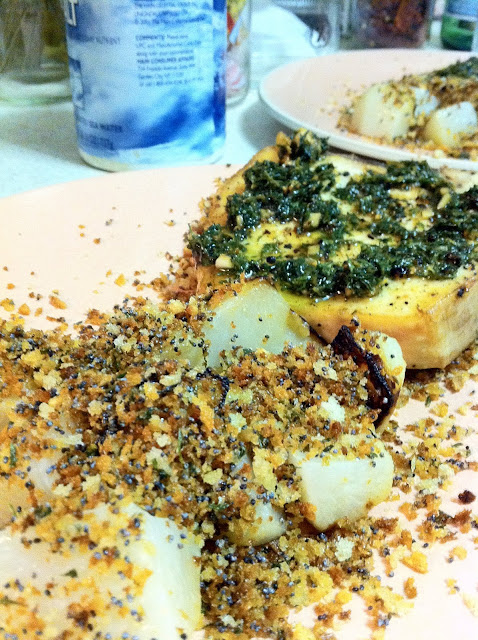 The side here is braised turnips with poppy seed bread crumbs. I would cut the lemon juice in half here as I found them to be too lemony. The Thrifty Sifter felt they were just right. 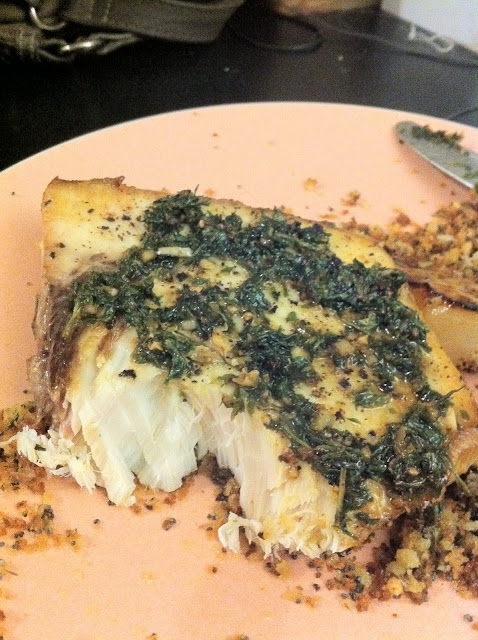 Your soundtrack for this entry: Judas Priest - Breaking the Law.
Posted by Jeremy Rosen at 10:00 AM No comments: