One of the problems with starting a blog before you go on vacation is that once you've started it you go on vacation. I've spent the last couple of weeks preparing for and taking a camping vacation to the Grand Canyon and Arizona with the Thrifty Sifter and just got back last night. Jeremy did do some cooking on that camping trip and Ms. YVB wants me to post pictures. Maybe I will, though I claim pictures of Annie's Mac and Cheese can't be that interesting.

Today I planned my regular kickball game in Astoria Park. Congruent with the World Cup final, we had the bare minimum number of players. Worn out I returned home to shower before going to Hellgate Social as we normally do after kickball for cheap eats, good beer, and fun folks. Of course, once showered and drying off I felt worn out from my vacation and traveling. Instead of going out, I decided to grab grub makings and cook. 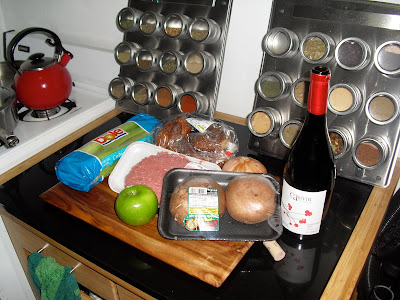 For most of my life my father had a few dishes he cooked for dinner. None of them were complex and, all in all, they were each quite tasty. One of these was the burger. His main trick involved using salt, pepper, and veal baby food in mixing his patties. Most people think this is weird because you're putting baby food in a burger. I think it's weird because they make human baby food made out of cow babies. Either way that stuff holds the burger together well and makes it taste great.

Tonight I decided to make veal burgers with an apple-celery slaw. No side dish since, seriously, a pair of burgers are quite enough food. 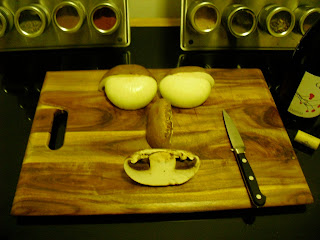 First I got my onion and mushrooms prepped for the blender. Peeled and halved, an onion and two mushroom caps make an excellent face. 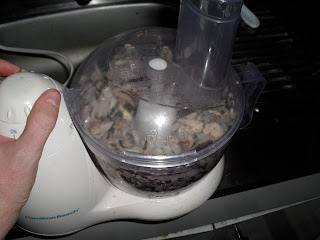 Gotta finely chop them funguses and funyuns. Pulse just a few times and you're done. 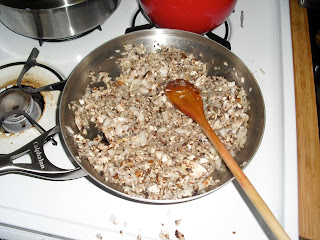 Cook it all up in a couple of tablespoons of olive oil for about ten minutes (until the liquid has boiled off).

Once cooked, take it off the heat and let it cool off in a bowl for a while. Don't let it get cold! 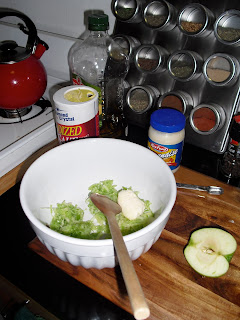 Whilst you're awaiting the completion of the above liquids' evaporation, why not begin construction of your celery-apple slaw? I did.

Putting the shredder on the food processor, I ran the pair of celery ribs and the half of the apple through. Were I to do this again, I'd use the whole apple, but had assumed it would add too much liquid. 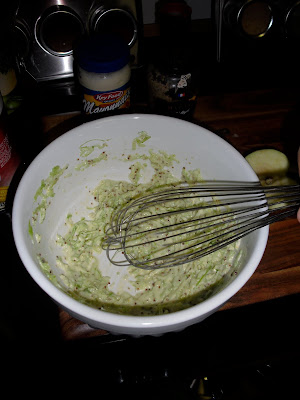 Next I whisked together some mayo (sorry Gianmichael), whole grain brown mustard, vinegar, salt, and sugar. Like the above-mentioned GM I dislike mayonnaise, but am not so orthodox that I can't have it in the occasional foodstuff as an ingredient.

Put this aside for about twenty minutes so all the good stuff can meld together flavourfully.

At this point it was time for a drink. 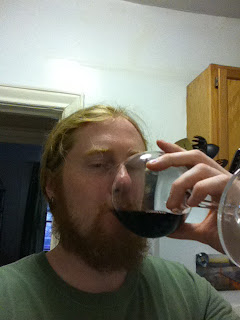 This was a Carivin Reserve tempranillo from 2007. It smells much fruitier than it tastes. Honestly, I picked it because the foil was a nice red (yes, I sometimes pick wines by the way they look). It worked out again as this wine was fantastico. 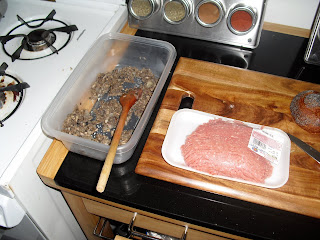 As you can see above, it's time to start mixing the veal and the mushroom/onion mixture. 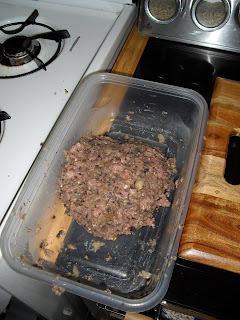 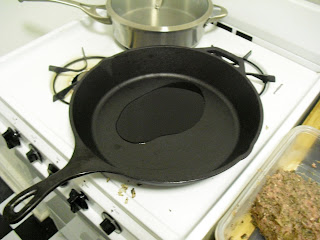 Finally got to break out my cast iron skillet for the first time! 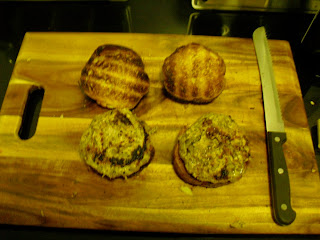 Burgers cooked and deployed on some nice poppy seed knots I found at the Key Food. 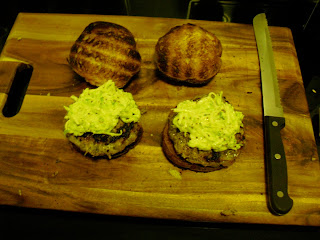 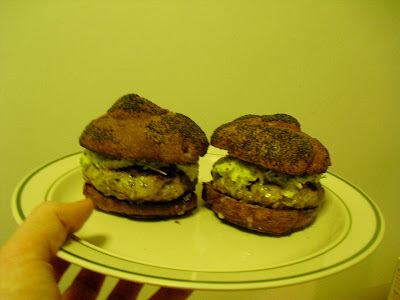 The final product is tasty, juicy, and somewhat different from your normal burger. Definitely making this recipe for other folks for dinner. 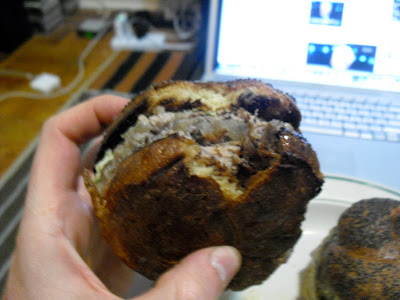 Your soundtrack for this entry is the Benea Reach album Alleviat.
Posted by Jeremy Rosen at 1:21 AM 2 comments: