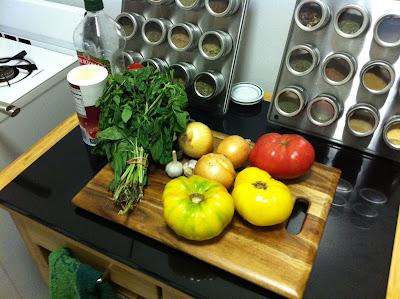 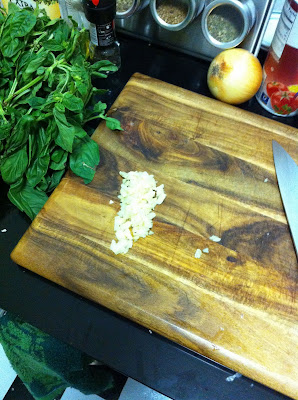 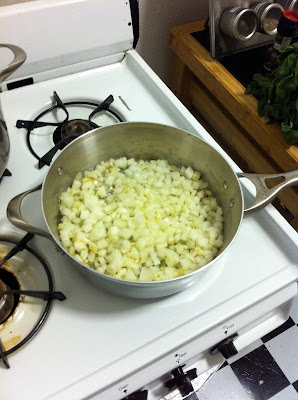 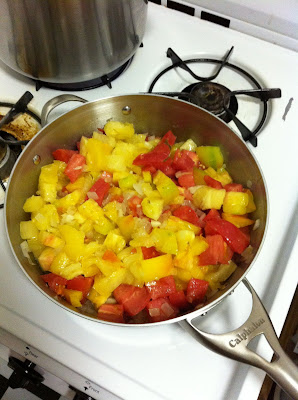 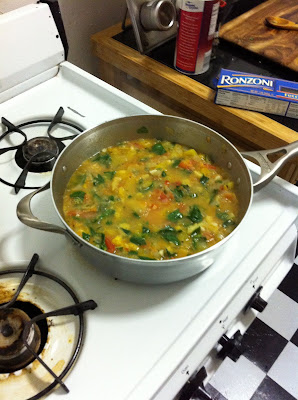 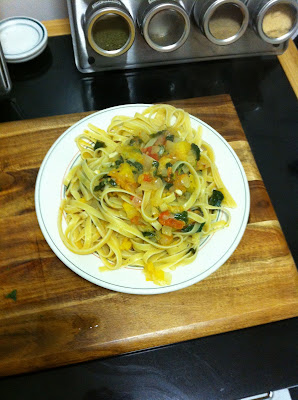 Your soundtrack for this entry: David Bowie - Reality
Posted by Jeremy Rosen at 12:58 PM 3 comments:

Spicy food is a particular favourite. Both of my parents enjoy hot cuisine, but I think their genes fused and went haywire with me.

Once when I was about 10 or 11, we were eating in a Chinese restaurant and I ordered curry chicken very spicy. Well, they made it for a little white boy and it wasn't very spicy, so I asked my Mom to get them to make it hotter. They brought out a dish of red chili sauce and looked on in horror as I dumped the whole thing in my meal. Tasted good!

In a bit of video we never ended up using, Adam D. from Killswitch Engage and I took the Man Versus Food challenge and ate the world's hottest curry. I've never heard that man speechless before or since...then again I took off work the next day.

And of course you remember my entry on The Ingredient.

Well, earlier this week I went to the Union Square Greenmarket to see what was available and make a dinner out of it. That entry will come in a day or two. I met up with the Thrifty Sifter and hit an awesome tomato and pepper stand right by the subway entrance. The smell of tomatoes was quite strong inside the station earlier that morning and compelled my later visit, where I discovered they had a wide variety of fresh chilies, including the famed Ghost Pepper, the hottest pepper in the world.

So of course I bought a whole carton of those and an assortment of other chilies. 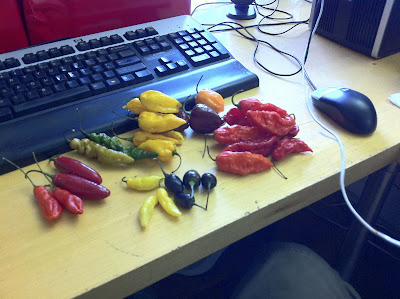 That stack of red ones on the right are the ghost peppers.

Now, love hot food as much as I do I still only cook a couple of spicy meals a week. So we're going to dry these bad boys. If you always wanted to know how to dry chili peppers, it's pretty simple. 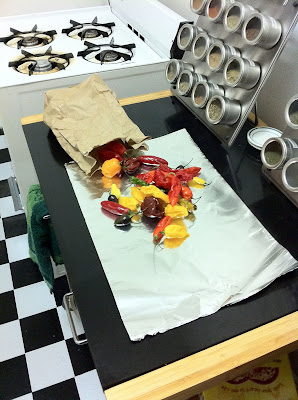 Essentially you can do these overnight or all day on a weekend. Since the temperature is fairly low there's not much of a fire hazard worry, but do make sure you have smoke and carbon monoxide detectors that work just in case.

Also, in this entry I'm clearly drying a few different sizes of peppers. I would not do this if you plan on leaving them unattended as they dry at different rates.

Wait until they turn a deep red or brown and brittle, then they're ready. 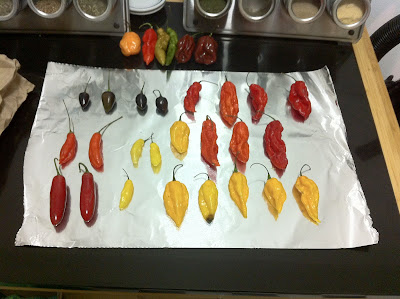 The peppers off the tray I'm saving for fresh use this week. Yes, one is a ghost pepper and yes, I'm going to eat it on video later this week. I don't remember the variety of the yellow peppers, though it is one of the jolokias and is only slightly less hot than the ghost pepper. Those greenish-black little ones at the upper left are called black prince. 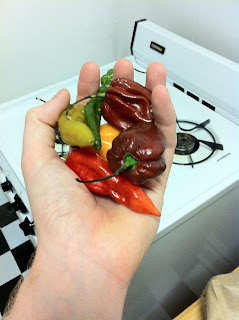 You'll probably notice the familiar orange of a habanero peeking out from the bottom of the pile there and right next to it are a new one one me: chocolate habaneros. I'm assured the name is purely descriptive of the colour.

The two green ones on the left are also new to me and I can't find a link about them anywhere yet: lightning. For dinner tonight I included one of these raw. The flavour is subtle, without the sort of bite a habanero might have. I was assured they were very spicy, but it's a rather slow build that allows you to really get the taste of the pepper going before your sinuses clear out.

And here we are after a few hours' heating, packed up and ready for later use! 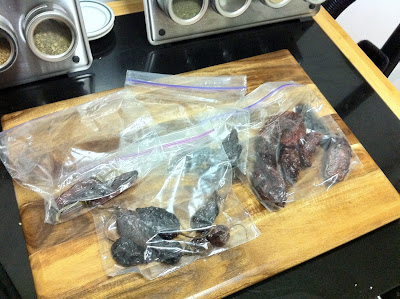 Your soundtrack for this entry: Ladyhawke - Ladyhawke
Posted by Jeremy Rosen at 9:00 AM No comments:

Let me preface this entry by saying this recipe is not for everyone, least of all steak purists. Certainly almost every steak I make is seasoned with salt and pepper and that's it. However, over time I hope to share the five or six other ways I prepare steak.

This is one of them. 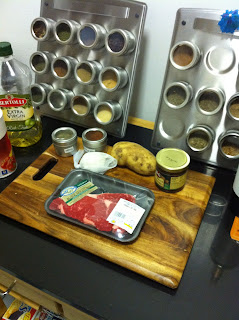 Start with:
So far I haven't seen this particular combination in many recipes, but I think sage and paprika are great compliments. The relaxed heat of paprika settles in with the late afternoon smell of sage in a way that makes the back of my tongue light up and my nostrils flare. 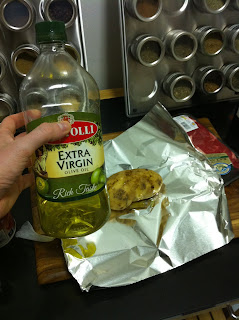 For the baked potato, I pre-heat the oven to 450 degrees, put the potato on foil, lightly coat with olive oil, and punch a few holes in it with a fork. Then it's into the oven for an hour.


While that's cooking up, spread paprika, sage, salt, and pepper on both sides of the steak. I like to let the spices sink in for a half hour to 45 minutes. 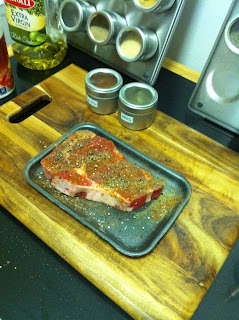 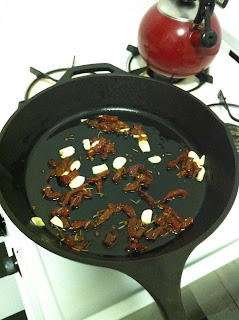 Slice the garlic cloves crosswise so you get some thin ovals. I often forget to do this, but you should preheat a cast iron skillet while you're slicing the onions. It takes a while longer for them to heat up to the right heat.

Once you've got it going, coat the bottom in olive oil and heat until it shimmers. Then add the garlic. While that's cooking up, slice up a handful of the sun dried tomatoes, then drop them in with the garlic.


Give this five to ten minutes, then push the garlic and sun dried tomatoes out to the edges of the skillet. It's time to cook up the steak! I like mine rare, so I only kept it on heat for about three minutes one side and three the other.

Pop out the potato, open it, and pour the sun dried tomatoes and garlic over the steak and potato. You're done! 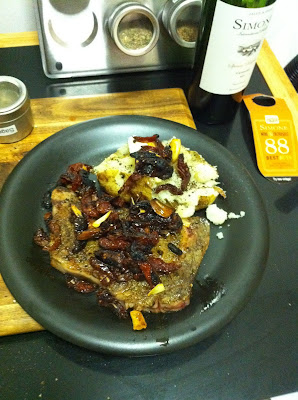 Of course you don't want to have your steak without some nice red wine. With this I had a Simone International Selection Carmenère from the Henriquez Hermanos Winery. Carménère comes from a rather rare grape varietal once thought lost! 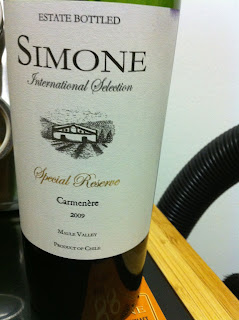 Your soundtrack for this entry: Iron Maiden - Can I Play with Madness
Posted by Jeremy Rosen at 7:42 PM 1 comment: