And an even quicker photograph of same! My apologies for the blurriness on this one. According to the New York Times puttanesca's name and origin have many explanations, likely apocryphal. Even so, I also appreciate a sexual connotation and my favourite explanation is also that this dish was intended to be created quickly so as to move on to the sexual intercourse.

In creating this I did not go to the New York Times' recipe linked to above. Instead I also improvised from ingredients in the house. This unfortunately omitted the anchovies, one of the best parts, but still ended up being tasty.

Pre-head a sauce pan, add olive oil and heat until shimmering, then add garlic and brown. Once the garlic is browned, add the rest of the ingredients and simmer until heated through.

Cook your pasta of choice (I used linguine), drain, and serve with the sauce on top. 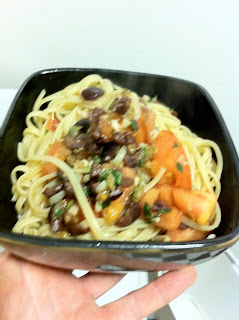 Your soundtrack for this entry: Times of Grace - Strength in Numbers
Posted by Jeremy Rosen at 8:00 AM