I came so close to making fish. Then it was almost another pasta. Then I figured just because I love pasta, you dear readers would think that's all I could make. Bah! The lamb caught my eye and the lamb's what I made. My arteries probably hate me now, but who needs them?

So, what's za'atar? Until a few months ago I didn't know either, but the Thrifty Sifter made some of her own and conveniently left it at my place. Essentially it's a Middle Eastern equivalent to salt and pepper in that it's the spice. Serious Eats has a more in-depth za'atar description. It goes great on meat, as I proved to myself last night.

Overall this was an extremely simple dinner to make.

To paraphrase Heidi Swanson, whose golden crusted brussels sprouts entry I perused, this isn't much of a recipe. Hell I would barely consider the above a list of ingredients. You can essentially follow her directions for the brussels sprouts. The only change I really made was using shaved parmesan.

Also, you should take her advice about using small sprouts. I'm battling a cold and don't feel so hot, so I rushed through the grocery store produce section instead of hitting up my regular United Bros. Fruit Company across the street. Some of my sprouts were on the large side and, yes, they burned and didn't make it to the final plate. 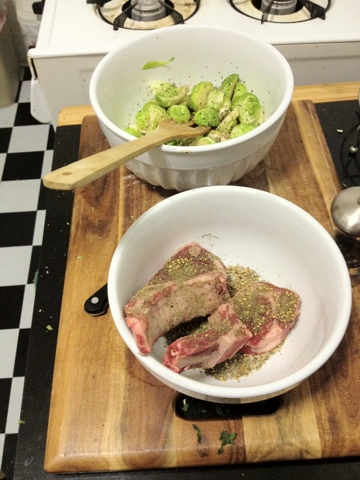 The lamb chops are a simple affair, too. Sprinkle salt on both sides, grind pepper on both sides, and dust both sides with za'atar. Let sit for 15 minutes or so, then sear them in a skillet over medium heat to desired doneosity. Let them rest a few minutes and serve. 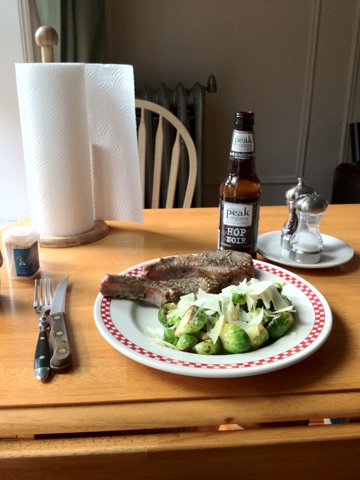 And yeah, even though I'm sick, I had to have a beer with dinner. That's a Hop Noir from Peak Organic, a black IPA. NOM!

Your soundtrack for this entry: Ghost - Ritual.
Posted by Jeremy Rosen at 11:50 AM