Late last month the Thrifty Sifter and I took off to Tuscany for a week of fun in the hills and walking the streets of Florence. We also made a pit stop in Ferrara to see some old family friends. I'll do a feature on some of the food we had there in a future post.

Of course, I brought back about ten pounds of Tuscany near my middle and still had a hankering for pasta. It's also the case that I eat entirely too much pork and beef and wanted something non-chicken. Enter the desire for a clam sauce.

This recipe was adapted from the May 2011 issue of Bon Appetit. About the most difficult part of it is waiting for the clams to open.

First hint: really scrub those clams under cold running water. I worked in a seafood restaurant for several years and I can tell you this is hugely important. You want to get all the nooks and crannies so you don't end up with grit. Who likes grit? Not me! 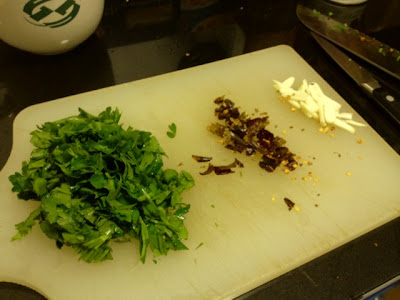 Here you can plainly see I went and used way more than two tablespoons of parsley. I like parsley. While you're prepping this, bring about 3 quarts of salted water to a boil in a 5 quart saucepan. If you don't know the measures, put enough water in a big one to cover the pasta. The cooking time will vary, but boil the pasta for about six minutes, which is a few minutes from tender. This is your second hint: really do this. Otherwise you'll overcook the pasta. Then drain and keep a half cup of the liquid in reserve. 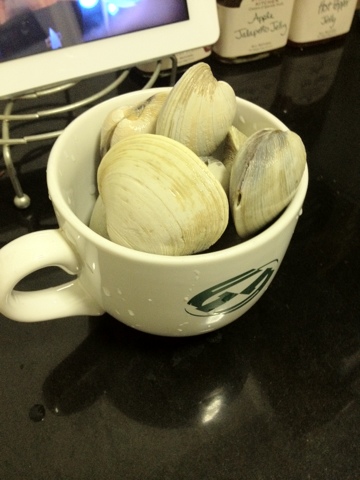 These are my temporary scrubbed clam friends hanging out in a coffee mug. No grit. No brains, neither. 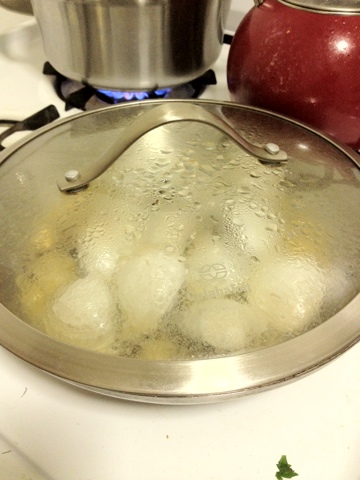 While you're boiling up the pasta, you should get started on the clam sauce. Pre-heat a large skillet on medium, add three tablespoons of the olive oil once it's piping. Add the garlic and stir until it's on the golden side of golden brown. Then add the red pepper flakes and stir for another 15 seconds or so. Add the wine, then the clams, and crank the heat up to high. Cover and cook until the clams opens to release their briny juices. That's probably about six minutes. As the clams open and give up the ghost, use some tongs to pull them out and set aside.

Here are several other things you can do with tongs. 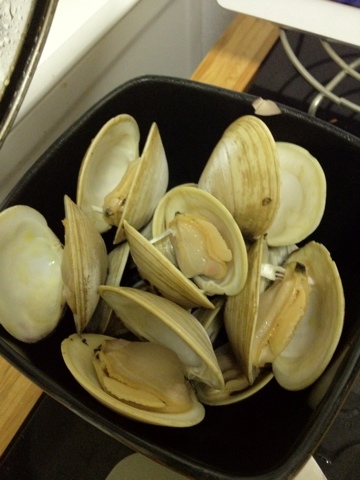 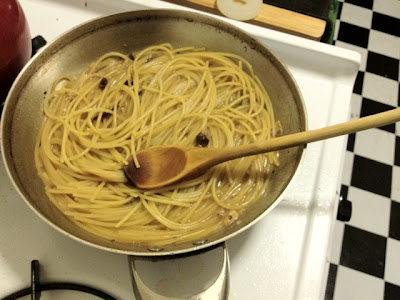 Add 1/4 cup of the reserved pasta liquid to the skillet, bring it to a boil, and add the pasta and continue to cook on high. Toss the pasta to coat thoroughly while it cooks until the pasta is al dente and absorbs some of the flavour of the liquid.

Put the clams back in along with any juices and the parsley. Combine thoroughly. If it seems a little dry, add some more reserved pasta liquid. Transfer to bowls and drizzle with remaining olive oil. 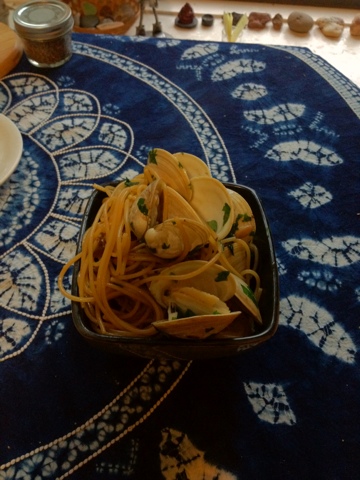 I'm quite pleased with this dish.

Your soundtrack for this entry: Garbage - Big Bright World.
Posted by Jeremy Rosen at 1:53 PM