Tacos. Tacos are my favourite food. Some kids like spaghetti, some hamburgers, and some rich people food. Well, when I was a kid I'd get three tacos and an extra taco shell from whichever taco place my Mom decided to visit that evening. Sometimes it was the frightful Taco Bell, and other times it was real Mexican food from a California purveyor.

As a child I didn't know better and Taco Hell was just as good as anything else. The older I became and the more spice I liked, the more I went in search of great tacos. Still, it took until my mid- to late-twenties for tacos to become my favourite food. Only then did I realize they were the perfect combination of meat, crunch, spice, cheese, and vegetables.

I'll skip all the intervening experimentation and get to the point. I found my favourite taco recipe and it is Michael's. According to his Food Network bio he is one of their personalities. Having not owned a television in 13 years, nor had cable in 15, I have no clue who he is. But christ his tacos are good. 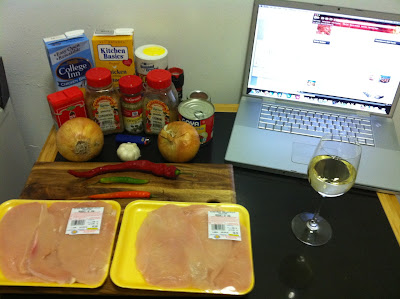 First I start off cooking the chicken (according to the recipe). One of the main problems with this recipe is smoked paprika. Look, you can find hot paprika. You can find sweet paprika more rarely. However, I've never once seen smoked paprika in my local grocery. The Thrifty Sifter found it once through her mother, but that's it. So in this recipe I use hot to replace the smoked.

You can see my trusty laptop on the kitchen trolley with notes open for this very entry as well as the recipe. I've mostly got Michael's recipe down, but it's good to get a refresher ever couple of times. One thing I forgot is just how good oregano smells. 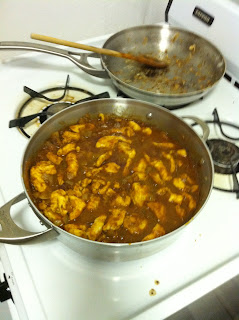 All of the ingredients pictured above make their way into the pot at left. The one trick to this recipe is to "over-brown" the chicken. It will get more juicy in the final mix, but it needs to have the fuck cooked out of it before being added to the rest of the recipe.

Another tip with this recipe is to only add half the chicken stock or broth to the recipe at first. Let it cook until it's thick, then add another two cups and cook for longer. I've never found the chicken to be tender enough in the time allotted by the recipe.

After about twenty or thirty minutes, add some more stock and cook another half hour or so. I often add more peppers at this point since I like the fresh pepper taste, but that's up to you. In this case I went purely for chipotles and it wasn't that spicy. 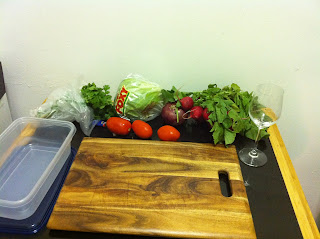 Next up come the garnishes. I LOVE cilantro and onions, so I chop the onions over roughly-chopped cilantro and get a nice mix of both to spread over my tacos.

The radishes are pretty awesome and most people don't think to have them on tacos, even though they be authentic.

Tomatoes: sometimes I take the time to get the seeds out, sometimes I don't. Tonight I didn't.

I also don't usually use iceberg lettuce, but when I do I choose Foxy produce. Never do I get brown, wilted lettuces.

One of my favourite winemakers is Santa Carolina. If their website weren't so horrendous, I would link you directly to my favourite of their wines, the carmenere, which is a long-lost grape varietal from France. Tonight I chose their sauvignon blanc and was not disappointed. 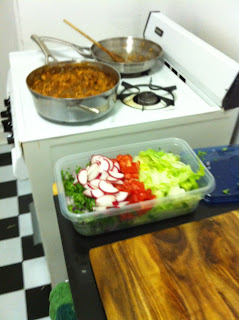 When making this recipe, like my local taco truck, I like to place all the toppings into their own area. But I do so in a large container so I can keep it for later. Even I can't eat 12 - 18 tacos in a sitting.

Here I have a large-size Ziploc with red onion and cilantro mixture, iceberg lettuce, tomatoes, and sliced radishes. Tomorrow I'll unpack that and my filling with cheese for dinner. If there's anything left over, I'll pop them into some containers for lunch on Wednesday.

While I'm here, just after this picture I added some more salt to the bubbling filling. This recipe ALWAYS needs more salt. I've never once made it where I didn't add more; usually I added a lot more. It's not that the rest of the spices don't cut it, but it just needs some salt attacking the rest of the flavours to get the job done.

Unfortunately, I was so hungry and so excited that I neglected to take a photograph of the final product. I can assure you it was tasty.

Your soundtrack for this entry is Huey Lewis & The News - Greatest Hits
Posted by Jeremy Rosen at 11:20 PM