I want to perfect bison ragu. Perfection is the theme of the next several entries because in the past I've made entries that needed work and not put in that work to show you. The bison ragu shows so much promise that it's the first recipe to go through the refining wringer.

Preparing for this version involved some research into a traditional ragu. Many different meats show up in ragu, but they almost always involve a pork product and beef. Apart from cheese they usually take dairy in the form of milk. Of course wine gets involved in many recipes as well.

Bison ragu is not new, but most recipes I've found take off from a Classic Ragù recipe in Bon Appétit. This takes the Italian version of a mirepoix, a soffritto, as a base, adds the meats and other ingredients, and allows to stew.

Essentially I feel a ragu is a stew over pasta and I'm trying to find my way to a recipe that emphasizes the meat, melds it with the pasta, and gives it a chunky (yet soft) texture. Think of a hearty stroganoff.

Interestingly enough the two bison ragu recipes I found seem to take off directly from Bon Appétit's. It might be a consequence of most ragu being made that way, but still interesting. The most-direct contributor to this recipe was from Foodie Reflections. I found that recipe through Whipped the Blog, whose recipe helped me find my way through what I wanted to do. 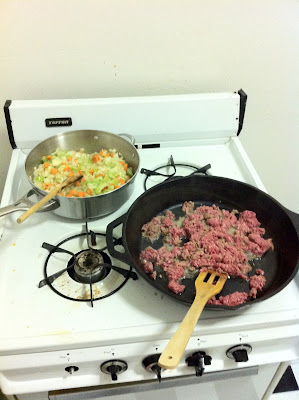 Here I cooked the soffritto next to the ground bison. 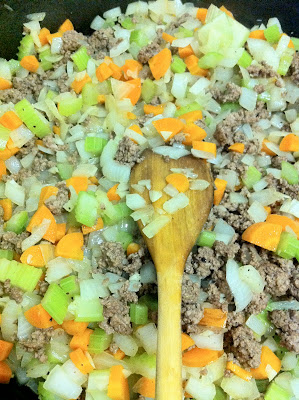 You can see the payoff when mixing the bison and soffritto. It looks inviting, I'm sure you can guess it smells great through the picture, and onions and garlic obviously can help make anything taste great. 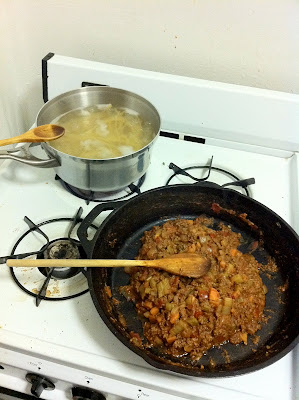 Here we've added the fresh tomatoes, some beef stock, and some peppers. 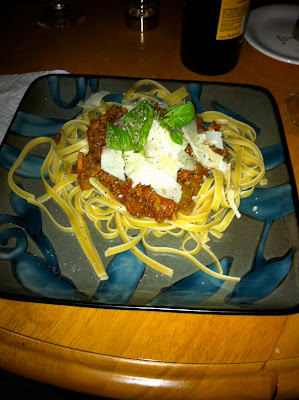 The final product found great success with my guests, who brought me the fantastic cabernet sauvignon below. 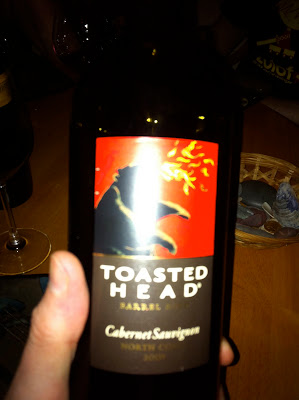 For the next iteration of the bison ragu I do think I need to add some creaminess and a more reduced texture. For that I think I'll need cheese and time. Hope you stick with me!

Your soundtrack for this entry: Van Halen - Running with the Devil.
Posted by Jeremy Rosen at 7:30 AM