The Chicken I Forgot

It's clear that I didn't write for almost all of February. A lot of recipes were banked in February, though. Of course sometimes you risk forgetting a few things and in this case I don't even remember what the recipe was.

Obviously the main dish is a chicken breast. There are kalamata olives, probably some onions, tomatoes, and peppers. It could be chicken breasts provençal. But I don't really know. And clearly I was in a rush if the side dish was so obviously frozen mixed veggies (don't knock 'em). 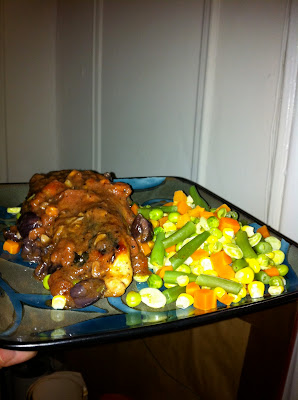 Your soundtrack for this entry: ohgr - water.
Posted by Jeremy Rosen at 9:10 AM